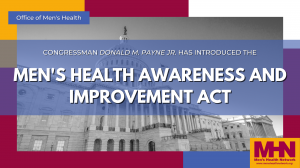 U.S. Rep. Donald Payne Jr. introduces the Men's Health Awareness and Improvement Act – which will establish an Office of Men's Health at the HHS.

WASHINGTON, DISTRICT OF COLUMBIA, UNITED STATES, November 22, 2021 /EINPresswire.com/ — Men’s Health Network (MHN) applauds U.S. Representative Donald M. Payne Jr. (D-NJ) for his leadership in introducing the Men’s Health Awareness and Improvement Act. The legislation will establish an Office of Men’s Health within the Department of Health and Human Services for the purpose of promoting Men’s Health initiatives in the United States.

“I am proud to introduce the Men’s Health Awareness and Improvement Act to create an Office of Men’s Health at the Department of Health and Human Services,” said Rep. Donald M. Payne, Jr. (NJ-10). “The new office will help coordinate activities between federal, state, and local governments to improve men’s health nationwide. In addition, it will connect the knowledge and research on men’s health from several federal agencies to ensure that the federal government can address the unique concerns of men’s health. This bill will help America increase the life expectancy of men and our understanding of men’s health issues.”

Men die at higher rates for 9 out of 10 of the top causes of death, and men (75.1) on average live five less years than women (80.5), according to recent data from the Centers for Disease Control and Prevention (CDC). Additionally, Hispanic men (76.6) live almost seven less years than Hispanic women (83.3). Black men (68.3) live on average the least out of these three groups, and seven and a half years less than Black women (75.8).

“We applaud these representatives coming together with the common goal of bringing Men’s Health closer to the center of the healthcare conversation in the U.S. government," said Ana Fadich-Tomsic, MPH, CHES, Vice President of Men’s Health Network. “Despite advances in medicine and technology, men are continuing to live sicker and die sooner than women. Establishing an Office of Men’s Health will further amplify the health and wellness of men, boys, and their families, everywhere. We urge both chambers of Congress to pass this important bill, and for President Joe Biden to sign it into law.”

The statistics alone show that men live sicker and die younger than their female counterparts, and justify establishing an Office of Men’s Health. Other reasons include lack of access to healthcare providers and education. Men are half as likely to seek medical care as women due to societal norms established by parents, coaches, and others who tell boys at a young age to “shake it off,” or “man up.” An Office of Men’s Health would help deliver a more central and empathetic message, and provide resources for men and boys to seek medical care.

“It is important that we have a level of coordinated effort and synergy for men’s health initiatives throughout the country,” said Darrell Sabbs, Community and Public Relations Representative for Phoebe Putney Health Systems. “Establishing an Office of Men’s Health would supply that central stream of advocacy and resources.”

That centralized advocacy is increasingly important for men, especially since the pandemic has helped demonstrate the discrepancies in health outcomes between men and women. A 2020 study from the CDC found much higher mortality rates for male coronavirus patients compared to women, stating, “The novel coronavirus disease 2019 (COVID-19) is shining a spotlight on the neglect of men’s health at local, state, national, and global levels.”

“Despite amazing advances in diagnostic and treatment technology it is a sad fact that, according to CDC’s most recent analysis, the lifespan of American males has once again declined,” said MHN Senior Science Advisor Dr. Salvatore J. Giorgianni, Jr., PharmD. “While improved technology and access is so important, America’s men need to have a bold new approach to coordinate health policy that drives access. Establishment of an Office of Men’s Health within HHS will do much to help in this regard, just as establishing the Office of Women's Health many ago has advanced the health of America’s women.”

The office will monitor and coordinate efforts to improve the health and well-being of men by streamlining federal and state government efforts in the areas of prevention, health education, outreach, and research.

“[An Office of Men’s Health] would be in a position to advance and promote the development of health professionals and provide avenues to develop innovative programs specific to improving men’s health outcomes.” Said Darryl Davidson, Director of the Milwaukee Fatherhood Initiative, City of Milwaukee.

This office will mirror the existing Office of Women’s Health, which was established in the early 1990s, and has already improved the quality of life for hundreds of thousands of women.

Men’s Health Network (MHN)
MHN is an international non-profit organization whose mission is to reach men, boys, and their families where they live, work, play, and pray with health awareness messages and tools, screening programs, educational materials, advocacy opportunities, and patient navigation.

For information on MHN's programs and activities, visit them at MensHealthNetwork.org, on Twitter (@MensHlthNetwork), and on Facebook (facebook.com/menshealthnetwork), see more Men's Health Network content at https://linktr.ee/menshealthnetwork or call 202-543-6461 ext. 101.