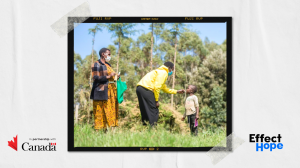 Child receives de-worming medicine and vitamin A to protect agains the harm of soil-transmitted helminths. This medicine keeps a child worm-free so that they can grow up healthy and strong. 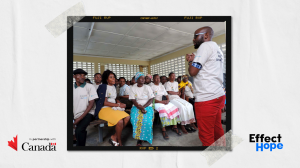 Group of health workers receive training for distribution of life-saving medicines for pre-schoolers.

It is an honour to be recognized for a second year by Charity Intelligence for the work that we do with partners to bring hope and restoration to people affected by neglected tropical diseases.”
— Kim Evans, CEO of Effect Hope

MARKHAM, ONTARIO, CANADA, November 17, 2021 /EINPresswire.com/ — Charity analysis organization Charity Intelligence Canada (CI) named Effect Hope as one of their Top Ten Impact Charities and Top Ten International Impact Charities for 2021. This is the second year in a row that Effect Hope has been named a Top 10 Charity.

Effect Hope was among 300 charities evaluated for the impact this year, and one of 800 that CI reported on and rated. According to CI's analysis, the highest-impact charities demonstrate programmatic returns of almost seven dollars for every dollar invested by donors in Canada. This is based on the number of lives measurably transformed by programs.

Effect Hope, a global health organization, was recognized for its work with people affected by neglected tropical diseases: life-limiting diseases of poverty that cause disability and stigma. Specifically, CI noted that the work of Effect Hope and partners touches the lives of about 2.3 million people across parts of Africa and South Asia with a variety of programs and strategies. Effect Hope achieved this reach despite the impact of COVID-19 on program delivery.

"Together with our supporters here in Canada and our partners, we are shining a light on neglected tropical diseases. For over 129 years, we have worked to eliminate suffering for as many affected people as possible," Evans continued. "We address these diseases with upstream solutions like deworming, awareness programs, and research. We take action to detect the diseases early. We also work with local and national governments to strengthen and improve health systems, and, of course, we offer medical care for those in need," she added.

Effect Hope works with partners in Bangladesh, India, the Democratic Republic of the Congo, Kenya, and Liberia. Together, they work to end neglected tropical diseases like leprosy that isolate and compound poverty.

Effect Hope is a Canadian Christian global health organization that partners with others to bring hope and restoration to people affected by neglected tropical diseases like leprosy. These diseases cause illness and disabilities, perpetuate poverty, invite discrimination, and eliminate hope. For about 130 years, Effect Hope has worked together with affected communities and people to find innovative solutions to ensure that those living with neglected tropical diseases can thrive.

With partners and supporters, Effect Hope seeks to create a world where people overcome neglected tropical diseases like leprosy – A world full of hope.

We could not have done this without you!