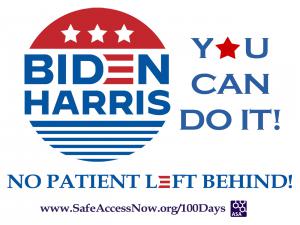 Biden-Harris Can Do It!

Now that medical cannabis is getting some recognition federally, we cannot sit back and relax, we must push harder than ever until there is safe and affordable access for everyone in the country.”
— Debbie Churgai, Executive Director of Americans for Safe Access

WASHINGTON, DC, UNITED STATES, March 2, 2021 /EINPresswire.com/ — Washington, DC — Today, Americans for Safe Access (ASA) launched its Biden-Harris Can Do It: No Patient Left Behind campaign to seize the first 100 days of the new Biden- Harris administration as an opportunity to influence medical cannabis policies and mobilize a movement to pass comprehensive federal legislation in the 117th Congress.

Although medical cannabis is available in 36 states, the District of Columbia, and four U.S. territories, the current patchwork of state laws mean that each state has different legislative and regulatory conditions for access, leaving millions of patients who should be able to obtain and use cannabis for medical purposes still without access, including: veterans whose VA doctors are unable to recommend medical cannabis, patient’s living in subsidized housing, federal employees and government contractors that are subject to drug testing, other employees in jurisdictions that do not provide employment protections, patients in treatment or hospice centers, and people living in poverty are still struggling to access this medicine in most of our country. These gaps in access also disproportionately affect black, brown, queer, disabled, elderly and other marginalized communities.

“For nearly 2 decades, advocates have been pushing to make medical cannabis a priority and every Congress has let us down,” said ASA Executive Director Debbie Churgai. As the patchwork of cannabis laws in the United States continues to evolve inconsistently from state-to-state, only action at the federal level can ensure that no patient is left behind. Now is the time to tell Biden-Harris to uphold their campaign promises and provide medical cannabis patients across the country with the protections they deserve.

While advocates work on passing medical cannabis legislation in this Congress, there are several policies that the Biden-Harris administration can undertake now without Congressional action. The campaign is designed to drive ASA advocates and partners at various Biden-Harris Administration departments and agencies to request their leadership in improving federal policy outcomes for patients. Specifically advocates will ask:

1) The Secretary of the Department of Veterans Affairs to allow VA physicians to recommend medical cannabis to veteran patients
2) The Secretary of the Department of Housing and Urban Development to stop evicting medical cannabis patients who live in federally subsidized housing
3) The Director of the Office of Personnel Management to remove cannabis from the list of prohibited substances that federal employees and contractors are screened for as a condition of employment
4) The Attorney General to update and reissue the Cole Memo to offer interim assurances to patients, and
5) The President and Vice President to organize a comprehensive approach to medical cannabis policy reform by establishing the Office of Medical Cannabis Control

ASA will be issuing calls to action for ASA members and coalition partners to engage in this critical effort to get the new Administration working on these important patient priorities.“Now that medical cannabis is finally getting some recognition federally, we cannot sit back and relax, we must push harder than ever until there is safe and affordable access for everyone in the country,” said Churgai.

ABOUT AMERICANS FOR SAFE ACCESS
Americans for Safe Access (ASA), is the largest national nonprofit, member-based organization of patients, medical professionals, scientists and concerned citizens promoting safe and legal access to cannabis for therapeutic use and research with over 150,000 supporters in all 50 states.