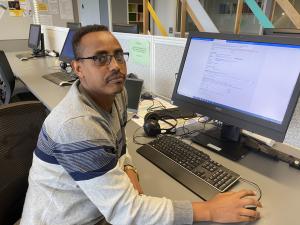 Globally, on average, 15-65% of pregnant women had depression.

Having depression during pregnancy increased the risk of low birth weight and preterm births by nearly 45%.”
— Abel Fekadu dadi

ADELAIDE, SA, AUSTRALIA, February 21, 2020 /EINPresswire.com/ — The childbearing age is the time of highest risk for women to develop antenatal depression (a major depressive episode during pregnancy), a disorder that is under investigation and under-treated. Although antenatal depression is known to be caused by genetics and environmental factors, it is exacerbated by high fluctuation rates of peptide and steroid hormones that occur during pregnancy and childbearing age.

Between September 2018 and March 2019, researchers from Flinders University, Australia, and the University of Gondar, Ethiopia conducted an umbrella review to summarize the global epidemiology, risk factors and effects on adverse birth outcomes of antenatal depression. The current study generated the most conclusive evidence of the above issues and involved reviewing, ten systematic reviews (with 306 studies with 877,246 participants) on antenatal depression and its determinant factors and, six systematic reviews (39 studies with 75,451 participants) on the risk of antenatal depression on low birth weight and preterm birth. Additionally, the study involved conduction scientific appraisals of all the included reviews.

The study conclusions were:

 The association between antenatal depression and adverse birth outcomes appeared to be modest overall, but with a higher prevalence of antenatal depression and poor access to quality mental health services, particularly in middle and low-income countries, its absolute impact would be significant.
 A history of abuse (childhood, current sexual, physical, psychological, domestic violence, intimate partner violence), lack of a partner or social support, poor marital relationships, personal or family history of any mental disorder or stress, and a history of poor obstetric conditions were the most frequently reported risk factors for antenatal depression.

 A significant number of women develop depression during pregnancy and give birth to low birth weight and preterm babies, adverse birth outcomes that are linked with infant morbidity and mortality and other developmental consequences.

 Although depression screening during pregnancy has been established and is implemented in higher-income countries, it is crucial to increase the focus on screening and management to meet Sustainable Development Goals targets related to mothers' and children's health in low- and middle-income countries, where higher burden exists and lack interventions and management measures to address antenatal depression. The current study findings have significant benefits, including providing evidence to inform and reinforce the development of policies and practices to address the impact of antenatal depression on the health of pregnant women and newborn babies across the globe, and in particular in the middle- and low-income countries.

 Unlike medications that have also been linked with adverse pregnancy outcomes, psychotherapy which involves the identification of possible sources of stressors and the provision of advice at maternity clinics, is a risk-free option and should be advocated to manage antenatal depression. Improving general, partner support and healthy relationships should also be enhanced by encouraging partner involvement in pregnancy, advocating for more social support and other social capitals as part of the management of antenatal depression.