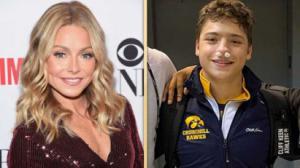 LOS ANGELES, CA, UNITED STATES, February 14, 2020 /EINPresswire.com/ — Kelly’s son,Joaquin Consuelos,broke his nose during a wrestling tournament in late January. On “Live With Kelly And Ryan”, the host used a touch of humor as she shared the story and photos pictures of the nostrils stuffs with cotton wads. To his credit, with great grit, Joaquin rebounded from the injury to win his match.

“You win some, you lose some, and sometimes you get a tampon shoved up your nose. #mayorscup #wrestlers #wrestlerslife,” the proud mother joked about the cotton tampons that plugged up Joaquin's two bleeding nostrils. OK for a very temporary fix, until proper treatment could be provided. Yet it appears that after the match, no upgrade in treatment was provided. “It looks like a 1917, World War I battlefield treatment,” stated Dr. Robert Kotler, a former Major in the US Army Medical Corps and Beverly Hills nasal surgery superspecialist. After the match, modern treatment was available.

Soft, silicone airway tubes rest painlessly on the floor of the nose. Right after the match, Joaquin would have been well-served to have the benefit of modern management of such injuries. “Today, hidden bio-dissolvable pads, developed for military use, are placed to stop bleeding and speed—up healing. With the pads in place and otherwise blocking air flow through the nose, patients appreciate the small soft silicone plastic tubes that the surgeon places onto the floor of the nose to provide clear breathing and help keep the internal pads in place. A huge patient pleaser”, states Dr. Kotler.