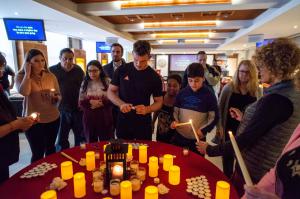 In the Church of Scientology of Tampa’s chapel, attendees of 2019’s Holocaust Remembrance Day light candles before a moment of silence.

On Jan. 27, CCHR Florida and the Church of Scientology of Tampa will team up to educate Tampa Bay on the link between psychiatry and the Holocaust.

“We must never forget that it was psychiatrists who provided the facilities, training, personnel and technology for the Nazis so they could execute millions of Jews.”
”
— Diane Stein, President CCHR Florida

CLEARWATER, FL, UNITED STATES, January 23, 2020 /EINPresswire.com/ — On Jan. 27, the Citizens Commission on Human Rights (CCHR) Florida will co-host an event for International Holocaust Remembrance Day to honor the millions of lives lost in Nazi concentration camps during World War II. This event is also a human rights education luncheon, where attendees can learn exactly what rights were violated and how they can be protected for all future generations.

The event will be hosted in the chapel of the Church of Scientology of Tampa with a performance by international singer and Israel native Judy Bechar.

CCHR Florida President, Diane Stein noted the importance of raising awareness of the root cause of the horrific World War II human rights violations, stating, “As concluded by medical professionals during the post-Holocaust Nuremberg trials, the Holocaust would not have happened without psychiatry’s role. We must never forget that it was psychiatrists who provided the facilities, training, personnel and technology for the Nazis so they could execute millions of Jews.”

For more information on the event, to confirm your attendance, or to ask any questions about psychiatric abuses, please call CCHR Florida at 727-442-8820 or visit www.cchrflorida.org.

Initially established by the Church of Scientology and renowned psychiatrist Dr. Thomas Szasz in 1969, CCHR’s mission is to eradicate abuses committed under the guise of mental health and enact patient and consumer protections.
It was L. Ron Hubbard, the founder of Scientology, who brought the terror of psychiatric imprisonment to the notice of the world. In March 1969, he said, “Thousands and thousands are seized without process of law, every week, over the ‘free world’ tortured, castrated, killed. All in the name of ‘mental health.’”