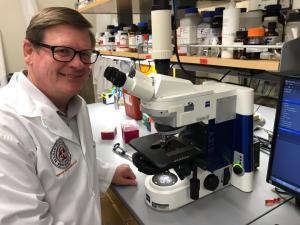 Dr. Gordon Pedersen In The Lab

The future of antibiotics includes silver, and the fact that silver is natural and safe provides and fantastic opportunity for the all-natural world to synergies with the antibiotic world.”
— Dr. Gordon Pedersen

According to the latest Centers for Disease Control report (2019) , “Miracle drugs no longer perform miracles.” Health Canada (2019) just reported in a similar publication that claims antibiotics have been over prescribed and are causing common bacterial infections to turn into superbugs. These germs are becoming so difficult to combat with antibiotics that health Canada is warning people that if we cannot come up with a solution that Canada will return to a pre-antibiotic world. This includes doctors prescribing toxic chemical to combat an infection and if that doesn’t work, amputation of the infected area may be the only answer. However both the CDC and Canadian Health failed to recognize the significant benefits of silver.

The world is facing a very dangerous problem, that of antibiotic resistance. The CDC states that antibiotic resistance is one of the greatest global health challenges of modern time and if it weren’t for the media focus on climate change it would be the most significant challenge to humanity.
Although people are scared because of these recent reports there is a solution… Structured Alkaline Silver. It’s all natural and will destroy bacteria, viruses and yeast simultaneously. Because it is an all-natural liquid and gel it doesn’t require a prescription and has no dangerous side effects.

Harvard Wyse research institute (2013) and Boston University Medical School published articles that document the benefits of silver. Their research reports how Silver reverses antibiotic resistance by stripping the defensive shell from the bacteria. In addition, silver can be taken with the antibiotics resulting in a 1,000 fold increase in the effectiveness of the antibiotic.

The fact that antibiotics are being irresponsibly used is causing one of the most dangerous health threats ever known. The important thing to remember is that silver taken at the same time as antibiotics can increase the effectiveness of the antibiotic 1,000 times and simultaneously reverse the antibiotic resistance.

Dr Pedersen is considered to be one of the world leading authorities on Silver. Dr. Pedersen holds four doctor’s degrees. He has a Doctorate of Naturopathic Medicine. He has a Ph.D. from the Toxicology program at Utah State University, where he also has Ph.D. degrees in Immunology and Biology. He is Board Certified in Anti-Aging and Regenerative Medicine and also holds a Master’s degree in Cardiac Rehabilitation and Wellness. He performed an internship with Jonas Salk, the American medical researcher noted for the discovery and development of the polio vaccine. He has formulated over 1500 products, was a Bronze medalist in the 2003 Utah Winter Games, and is a Best Selling Author. Dr. Gordon Pedersen has been published in numerous international peer reviewed scientific journals including the Indian Practitioner where he conducted a study that destroyed the Malaria parasite using silver.

According to Dr. Pedersen “ It appears that the future of antibiotics includes silver, and the fact that silver is natural and safe provides and fantastic opportunity for the all-natural world to synergize with the antibiotic world.”

Based on the following studies, tests of silver technologies were performed at a pharmaceutical grade lab located in Salt Lake City that is FDA registered and third-party accredited to ISO 17025 standards (ACLASS). It is a GLP, GMP, and GTP facility.

The primary goal of this study was to test structured silver’s ability to kill pathogens from each of the major categories of pathogenic bacteria along with one common yeast. A secondary goal was to test the efficacy of the 2011 structured silver technology with the leading silver aquasol technology of the previous decade. This comparative test only included experimentation on two bacterial strains.

According to a publication in the Townsend Letters, the results of this test were clear: the 2011 structured silver technology is effective with all major categories of pathogenic bacteria as well as Candida.

A second study comparing silver technologies occurred in the lab at Brigham Young University in May of 2014. This study compared five silvers of vastly different concentrations and their ability to kill MRSA, a drug-resistant form of Staphylococcus. Two silvers were a 10 ppm concentration, two were 30 ppm, and one was 200 ppm. This ‘apples vs oranges’ study showed that only one of the lower-concentration silvers kept pace with silver that was about 20 times more concentrated.

Importantly, results from this study were estimated. Quoting from the article: “Counts were so high, that the number of CFU had to be estimated on the 1:10,000 dilution of the reaction mixture. Thus, the log reduction and percent kill values are also estimates.”

Thus, two solutions (C and A) killed nearly all of the bacteria within two minutes while three solutions (D, B and E) killed approximately half of the bacteria. The identity of the lower-concentration solutions are as follows:
Solution A: The structured silver technology developed in 2011 by Dr Pedersen.
Solutions D, B, and E: Leading colloidal silver and silver aquasol brands
This is why structured silver is far better than just a single, ionic silver, colloidal or even the hydrosols of the past. “This is new and improved silver.“

Dr. Pedersen is a Distinguished Speaker for Special Operations Medical Association (SOMA) and has worked with several National and International governmental organizations on the topic of silver. He is also a regular keynote speaker at American Naturopathic conventions. He has volunteered and personally funded efforts to bring silver’s benefits into Africa’s poorest communities with dramatic results on malaria