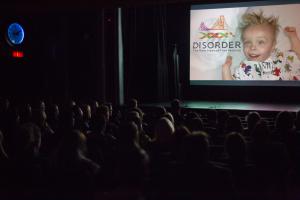 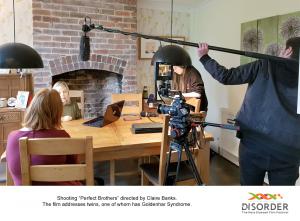 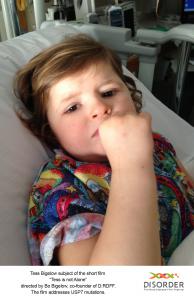 A still from the short film “Tess is not Alone a USP7 story” screening at D:RDFF 2019

We tell people: You may never be more moved at the movies. We also give out packs of tissues.”
— D:RDFF co-founder Daniel DeFabio

Disorder: The Rare Disease Film Festival (Disorder: RDFF) was started by two ultra-rare disease dads to showcase films from around the world that address the challenges of life with a rare disease.
Many of these films are one-in-a-million stories. Or two-in-a-million. In fact one of the films featured is titled “One in a Million” from Academy Award® winning filmmaker Ross Kaufman (“Born into Brothels”). Kaufman co-directed with Emmy nominee Jeremiah Zagar (“Captivated: The Trails of Pamela Smart”). Their short film beautifully addresses Charcot-Marie-Tooth Syndrome.

The festival's organizers have chosen 54 films dealing with some aspect of the 7,000 rare diseases, which affect 1 in 10 Americans. "We couldn't be more energized by the enormous response from filmmakers all over the world who are sharing these powerful rare-disease stories," said Bo Bigelow, one of the festival's co-founders.
“We're so glad to have not just documentaries this year, but fictional films, animated films, even a comedy or two,” said co-founder Daniel DeFabio. “We tell people: You may never be more moved at the movies.”
Some films are the first to be made about their subject disease, such as Menkes Disease, USP7 and Jon Dorflinger's film "Unconditional," which deals with an ultra-rare neurodevelopmental disease called PACS1. Other diseases addressed by the films screening in November include Spinal Muscular Atrophy, Cystic Fibrosis, NGLY1, Batten, Sanfilippo, and Mitochondrial Disease.

In the film “Deep Blue Breath” several well known Hollywood actors come together to make a film envisioned by a boy with VATER syndrome. Sean Astin (“Lord of the Rings”), Natasha Gregson Wagner (“High Fidelity”) and Ernie Hudson (“Ghostbusters”) are directed by Patricia Cardoso (“Real Women Have Curves”) in this touching story that makes leaps into animation and special effects as a sick boy imagines his battle with his disorder.
The festival will also bring back 13 of its most popular selections from their last event, which took place in Boston, MA in fall 2017.

Tickets for the festival are now on sale at the event's website (https://www.rarediseasefilmfestival.com/attend2019)

Disorder: RDFF aims to increase awareness of these diseases among not only the general public but medical researchers and industry as well. The festival's goal is to promote collaborations among rare-disease stakeholders in order to reach cures and treatments. Between many of the film screenings, rare disease researchers and patient advocates will also share stories from their experiences. These discussions have been shown to spark new thinking towards translation applications of current treatments and inspire avenues for new research. Additionally, many filmmakers attending the festival will have an opportunity to participate in questions and answers with the audience following the presentation of their films.
Disorder's founders are glad to have support from some of the leading organizations in rare advocacy—NORD, Beyond the Diagnosis, CheckRare and Global Genes, —as well as several leading orphan drug companies including Premier Research, Sanofi Genzyme, Horizon, and Takeda.
More information on the festival can be found here: www.rarediseasefilmfestival.com.

Photos are available to the press on request.
A trailer video can be viewed online https://www.youtube.com/watch?v=-JzjSVySeqE&t=7s